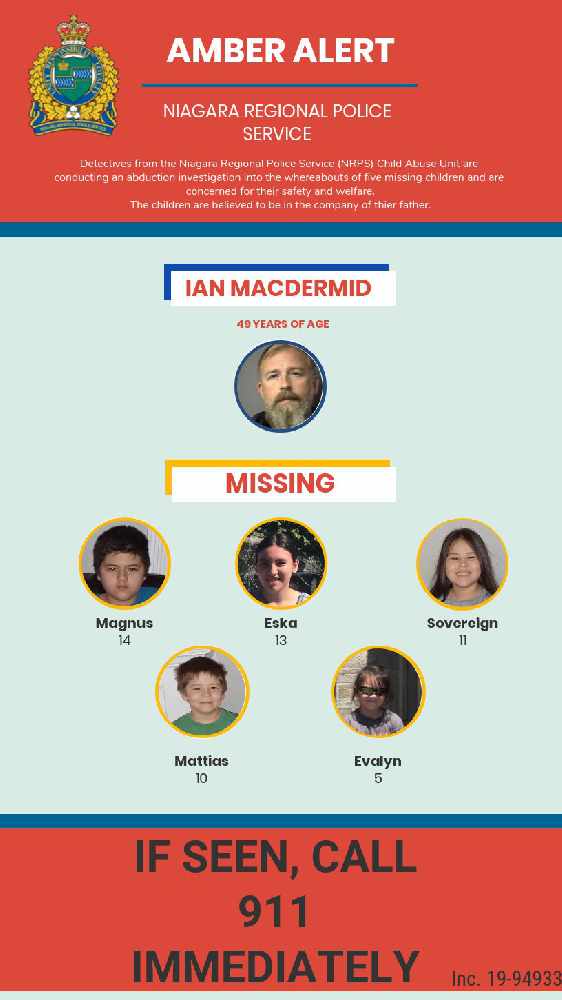 UPDATE 2: Police have tracked down the five-missing children from Jordan.

They were found safe inside a rental cottage in Ridgeway this afternoon. They're all in good health.

A red Toyota Camry was parked outside. The NRP says it was the same car 49-year-old Ian MacDermid was spotted driving yesterday.

According to Constable Phil Gavin, MacDermid was also found in the area with a 22-year-old woman.

He adds MacDermid has not been arrested and the investigation is ongoing.

Gavin would like to thank the public for their help so far. He says they helped narrow down the search to Fort Erie.

He was driving a red four-door Toyota Camry in the 2002 model year. The vehicle also had Ontario licence plates with the number CJMB 976.

The Amber Alert has expired, but the five children are still missing.

The kids, between five and 14-years-old, are under a temporary custody order.

Their 49-year-old father, Ian MacDermid, violated that order, when the kids weren't brought home on time.

They were taken between September 19th and 25th.

He may be driving a gold, or beige pick-up truck.

Police are investigating the abduction and are looking for any information.

They are concerned for the well-being and safety of the kids.